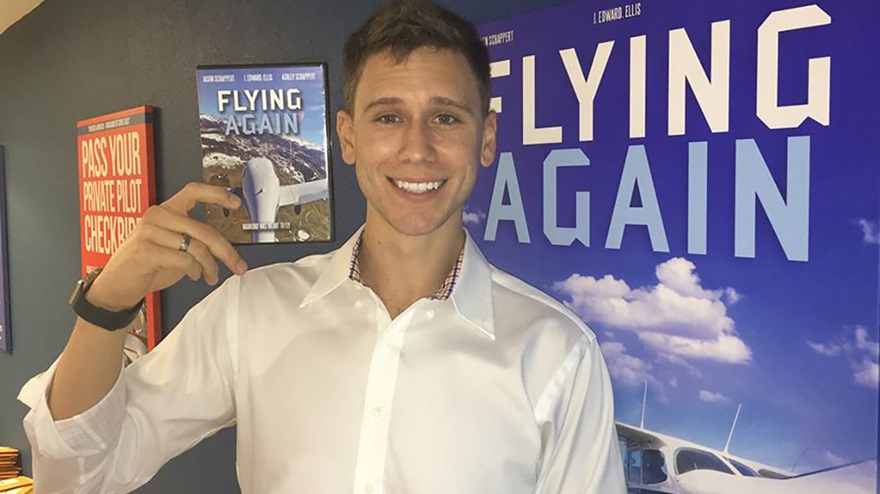 How do you get a lot of people to come out on a weeknight to learn about your flying club? Show a movie and offer free hot dogs and chili. That’s what the Paramus Flying Club in New Jersey did earlier this month and nearly 100 people showed up. 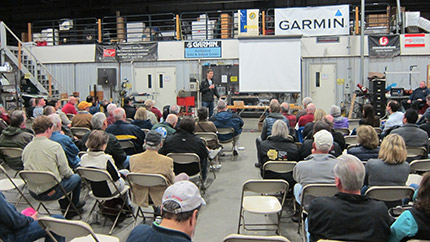 The film was Flying Again, a new 83-minute long movie available on DVD and produced by the online ground school MzeroA. It is a comprehensive film about getting current again and aims to inspire both Rusty Pilots and new ones to get into the cockpit and develop their pilot proficiency. Following the screening, MzeroA founder Jason Schubert, who was named one of AOPA’s Outstanding Flight Instructors in 2014 and 2015, spoke and took questions and answers.

The event was the idea of Paramus Flying Club Board Member Josh Langweil and co-hosted by C&W Aero Services, a maintenance and aviation shop that provided the hangar space and food. Josh has been watching Jason’s training videos on MzeroA.com and following him on Facebook and Twitter. He saw Jason was making a film and using the website Kickstarter to raise money for it, and that gave Josh an idea.

“I looked at the rewards and saw that one of them was a premier for your flying club,” Josh said. “I am on the board of my flying club and brought this to them, saying this was a good opportunity for a great event and maybe to help market our club.”

The Paramus Flying Club was founded more than 50 years ago and operates a Cessna 172SP with a G1000 based at Linden Airport (KLDJ) and a diesel Cessna 182 (which completed the first biofuel cross-country flight from Rhode Island to California in April 2016) based at Essex County/Caldwell Airport (KCDW). The club has about 40 members and is looking to expand and add a third aircraft.

To advertise the film screening, the club sent an email to its members, posted the event on its Facebook page and used a couple of local aviation resources. The Mid-Atlantic Pilots Association (MAPA) uses Meetup.com to promote flyouts and aviation events in the region, and in New Jersey if you have an aviation event that you want others to know about, you make sure Len Levy knows. He maintains a large email distribution list of local pilots and aviation enthusiasts and sends information ranging from TFR notices to the 99s annual poker run, and events like the movie screening. The outreach was effective with people from as far as Albany, NY making the trip to Caldwell.

Why Your Club Should Show Flying Again 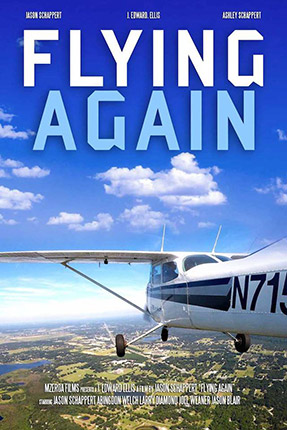 Flying Again is a film that will inspire anyone with a love of aviation—whether you are an active pilot, a rusty pilot, or someone with a passion for flight. The movie goes into the cockpit with footage of instructors and several different pilots with varying backgrounds who are taking to the air once again. Viewers get to see, hear, and experience the flight lesson—the good and the bad—so the film serves as a great training resource for pilots in all stages of training.

For aviation enthusiasts and pilots, some of the faces will be familiar, like EAA CEO Jack Pelton; Chelsea Abingdon Welch, CFI and founder of Abingdon Co. known for its aviation watches for women; and a host of AOPA staff—President Mark Baker, Senior VP of Communications Katie Pribyl, and Flying Club Ambassador Jamie Beckett.

But the stars of the movie are the rusty pilots, relearning and building their pilot proficiency. The movie defines proficiency as being able to handle an aircraft in a safe manner and controlling the aircraft, making it do what you want it to do.

The film illustrates just how broad the category of rusty pilot can be. It’s not just Bill Clayton, who hadn’t flown for 24 years. But it’s also the student pilot who wasn’t able to fly consistently, or the airline pilot who flies a jet every day but hasn’t flown general aviation aircraft in a few years, or even a CFI. “CFIs can get rusty even if they fly every day,” Jeremy Allen says in the film. It always goes back to whether you can get the airplane to do what you want it to do.

The most recognizable pilot in the film is probably Ariel Tweeto, who was one of the stars of the TV show Flying Wild Alaska. She hadn’t flown in three years and most of her flying was in Alaska where radio communication is much more casual than in the lower 48. The footage of Ariel’s flight lessons show just how challenging it can be to communicate properly on the radio.

During the Q&A after the movie, Jason said the top three challenges for rusty pilots are radio communication, the new technology, regulations and of course, landings. While technology makes learning to fly an airplane again more difficult than it might have been years ago, the key to get proficient is to learn to fly airplane again first, Jason said.

MzeroA is on a mission to showcase lapsed pilots from all walks of life on their journey to become current. The cinematography is awe-inspiring with flight lessons taking place in the mountains of Colorado, from airports on small islands off the coast of Florida, over the desert in Las Vegas, and in the winter skies over Michigan. Flying Again uses various locations, instructors, and aircraft to showcase the beauty of flight and thriving aviation community.

Jason has held screenings of Flying Again for other clubs and is available to come to your club if you’re interested. Or your club could get the DVD and do your own screening.

“We did plenty of advertising and was hoping that we’d get a good turn out and people would sign up for the club. We have our display out there and I think it went really well,” Paramus Flying Club Board Member Josh Langweil said. “Hopefully we inspired some people who were thinking about getting back into aviation to do so, hopefully with the club.”