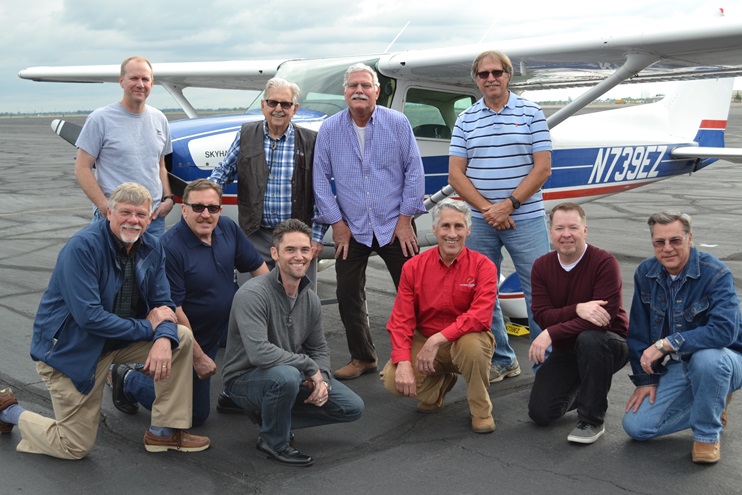 The key to operating a flying club successfully for 50 years is simple. That’s the secret. Keep it simple. And it doesn’t hurt to keep things consistent, too.

In April of 1966 Louie Kraushar was a pilot who rented aircraft. He got three or four people together, bought a Cessna 172 and formed a club. Louie became president of the club and held that position for the next 49 years. Simple. Consistent.

The club grew to 12 members fairly quickly and the Low Flying Angels has maintained that membership level ever since. Simple. Consistent.

Looking back over the 50 years, the numbers are impressive. The club has had five aircraft and logged 10,500 hours. At 120 miles per hour, which is the average speed of a C-172, that equates to about 1.26 million miles traveled or 50 times around the earth’s circumference. There have been a total of 66 members, and until late last year, just one club president.

The celebration of the club’s 50th Anniversary in April was also a celebration of Louie’s 84th birthday. He was honored with the FAA’s Wright Brother’s Master Pilot award, which recognizes pilots for 50 years of flying without an accident, citation, or revocation. 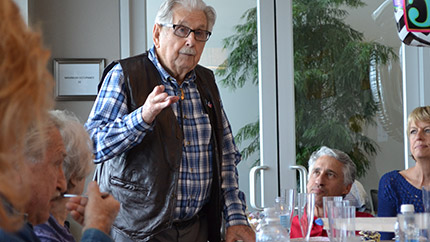 The Low Flying Angels has a 1979 Cessna 172N based at Sacramento Mather Airport (KMHR) in California and the club is organized as a non-profit corporation. It has a board elected annually consisting of a president, vice president, secretary, treasurer, and flight director, who is responsible for aircraft maintenance. Each member owns one share of the corporation and is responsible for selling their share when they wish to leave the club.

“The member that wants to sell a share can set any price they want for it, so if they choose to give it away, they can,” Club Vice President Kip Levinsky said. “If they choose to push the price up, they can do that. But typically the shares go for somewhere around $5,000.”

To join, members must have a private pilot certificate and a minimum of 100 hours PIC in a C-172 or similar type of aircraft. The club has a vetting process, which includes a flight with a current member and a two-thirds vote of the membership. The club does not offer primary instruction, but members can use the aircraft for advanced ratings.

About half the members have been in the club for 20 years or more, with the second longest serving member Louie’s son Ron. He has been in the club for about 30 years. Three or four members have joined in the past three years and Kip expects more turnover in the next few years as some of the longer tenured members leave the club. There are currently two shares that are for sale—including Louie’s share as he stopped flying a few years ago because of his age and health issues.

Dues are $60 a month, which cover fixed costs and the club charges $85 an hour, Tach time, wet. Of that, $15 is dedicated to an engine reserve. When there is a major expense, the members will pay an assessment. For instance, the club recently got a new engine for the plane and each member was charged a $600 assessment.

The club uses Google Calendar as its scheduling tool. “It’s a simple app to use,” Kip said. “You can get to it from your mobile device or a pc. And we use Google Drive for information about the airplane – we’ve got the bylaws there, we have the operating manual, information about all the avionics, club photos, that sort of thing.”

Scheduling is rarely a problem as a few of the members are no longer actively flying but maintain their membership and pay dues because they enjoy the camaraderie and association with the club. They’ll come out when there is a plane wash or cleaning day or club event. 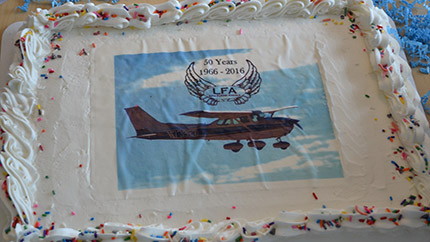 There also are a few members who own their own larger, higher cost aircraft. “These members joined the club so they would have a low cost alternative for short trips and to maintain currency,” Kip said. “It’s a win-win as it reduces their overall cost of flying and they tend to use the [club] aircraft less frequently, which makes it more available for the other members to use.”

Another advantage is that several members are retired, so they typically fly during the week, leaving the aircraft available on weekends for the members who work Monday through Friday. Scheduling, like everything else in the club is simple—it’s done on a first come, first served basis. If there is a conflict, members are respectful of one another and can usually work things out with a short phone conversation.

Kip credits the success of the Low Flying Angels to the club’s simple but well organized structured. Another key is having members who are “dedicated to and passionate about flying. We get together as a group for washing, waxing, cleaning, and maintaining the aircraft about twice a year,” Kip said. “Safety is really paramount, we’re all watching each other’s back. It’s a close-knit group of people. We help each other out quite a bit.”

So what do the next 50 years have in store for the Low Flying Angels? The club has recently started talking about upgrading the C-172 to a larger or more complex plane like a C-182 or a Mooney. Or perhaps the club will add a second plane and expand its membership. While that discussion has just started, there is something you can count on. Whatever the club decides to do, it will keep it simple and maintain its consistency.