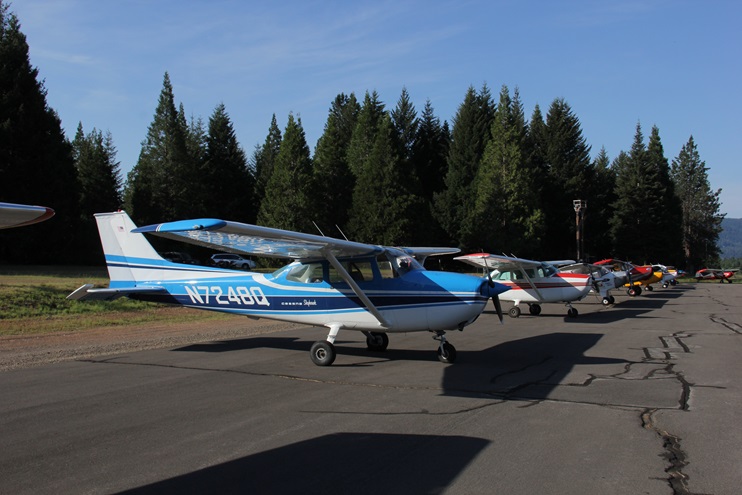 Hidden treasure is something usually associated with pirates on the high seas, not pilots flying high in the sky. To the members of the Rogue Valley Flying Club (RVFC) in Medford, Oregon, general aviation is a hidden treasure that they are intent on sharing through collaboration, camaraderie, and building community.

The club was founded three years ago to fill a need for flight instruction and aircraft rental. The driving force was Don Karpen, who is retired from the US Air Force and has been a flight instructor in the area for many years. He put together a group called the “Dedicated Dozen” and after a few fits and starts, they created the organization, got it registered, and trademarked their slogan, “taken with the skies.”

The heart of the club is camaraderie and fun and to provide the average Joe with an affordable way to fly. The club has two membership types – flying members pay a one-time, non-refundable joining fee of $750, and $50 a month in dues. Associate members, who do not have flying privileges, can join for free and pay $15 a month in dues. Currently there are 22 flying members and 23 associate members.

“The way that we explain the $750 fee,” Club President Don Hickman said is “we’re about $50 less an hour than comparable aircraft at different airports within 30 miles of our airport. So you’d basically have to fly 15 hours to break even.”

When the club formed, a friend of Karpen’s knew of a Cessna 172 that hadn’t flown in a couple of years and suggested the owner might be interested in a leaseback agreement. The club approached him and soon a contract was drawn up and the club flew the plane home to Rogue Valley International - Medford Airport (KMFR).

In three years, the club has flown approximately 1,300 hours on the aircraft. The RVFC recently added a second C-172, and is in the process of adding a C-182 this summer to bring its fleet up to three aircraft.

“The arrangement we have with the owner when we bring an aircraft into the club is we cover the insurance, we cover all the maintenance, [the plane] is hangared, and then we have a $15 an hour payment to the owner,” Hickman said.

The 172s rent for $95 an hour, Hobbs time, wet. In addition to the payment to the owner, $10 goes into an engine reserve, and $5 goes into an avionics upgrade fund for that particular aircraft. The 182 is expected to rent for $120 an hour, wet.

The RVFC takes a collaborative approach with the owners when it comes to maintaining the aircraft to the club’s standards. “We have an A&P mechanic in the club, so when we get a prospective aircraft that we want to bring on, we do a very extensive annual and go through and list everything that we see with the aircraft that might need correction before we bring it on,” Hickman said. “Then we work out a prorated schedule with the owner if something were to go wrong in a six-month period, if we have a radio failure right off the bat, the owner picks that up. As we progress, they’ll pick up 90 percent and we’ll pick up 10 percent, and when we get to six months we should have everything current.”

In some cases, the club and the owner will split the cost of upgrades 50/50. When the club was bringing the second C-172 into the club, several members were working on their IFR rating and wanted better avionics. The club and the aircraft owner agreed to split the cost of installing a used Garmin 430 WAAS and a new Garmin 345 transponder with ADS-B in and out capability.

The club also has a collaborative relationship with Million Air, the FBO on the field. “Million Air provides conference rooms for our board meeting and training sessions,” Hickman said. “They also hanger our aircraft, fuel and tug them onto the ramp on call up. I don’t think we could have a better relationship.”

That feeling is echoed by the FBO, which has a symbiotic relationship with the club. By supporting the RVFC and providing services, Million Air has a good customer that is expanding, which in turn increases Million Air’s business.

“The Rogue Valley Flying Club is one of the few places in Southern Oregon where someone can learn how to fly. The cost of insurance and aircraft ownership has created an environment where it’s not practical to rent aircraft for flight instruction,” President of Million Air Medford Joe Keith said. “The flying club members pool their resources and utilize leased aircraft to reduce individual members cost and make learning to fly a reality. Million Air Medford is proud to be affiliated with the flying club.” 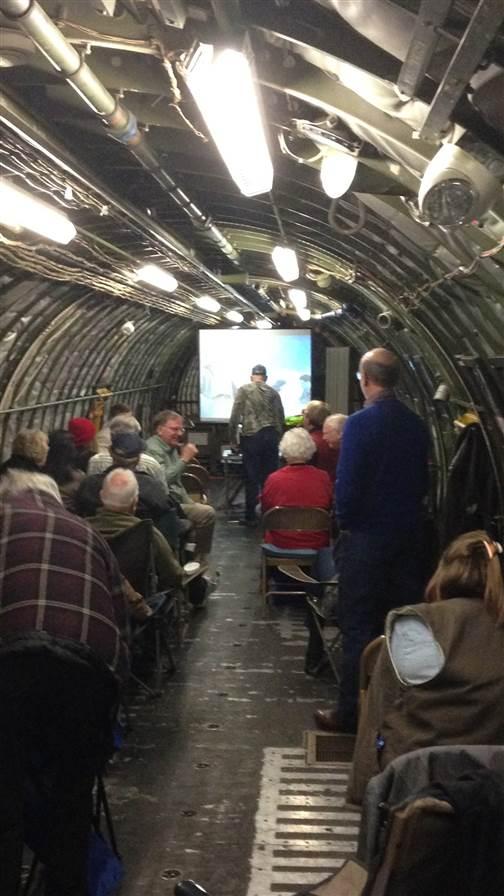 One of the ways the Rogue Valley Flying Club builds community and provides value to its members is through frequent activities—both social and educational.

Monthly meetings are held at a local Mexican restaurant and always include a guest speaker. In May the speaker was from the Medford Weather Service and the June topic will be a presentation about the Medford Tanker Base with information on what pilots can expect at and around the airport during forest fire season.

The club also hosts a movie night quarterly. Usually the movie is screened in the hangar, but once a year the airport allows the club to show a movie inside an old KC-97 cargo plane that is on static display at the airport.

“We do the typical milk duds and hot tamales and popcorn and hot chocolate and put our screen up and watch an old vintage movie,” Hickman said. “The plane basically has a cargo interior. It’s all wide open. We set up chairs and a table. It will hold about 30 people.”

The club also hosts training seminars, like a two-day Garmin 430 workshop, and encourages members to fly together—whether it’s in club aircraft or an associate member’s own plane.

“We fly in the nice weather every weekend to a little café, basically the $100 breakfast or hamburger,” Hickman said. “What we encourage is if folks don’t have an airplane, we just want passengers in seats. So everybody puts the call out saying, ‘Hey I have two seats.’ If you’re an associate member [without a plane] and want to go fly with somebody, you can go.”

Building Ties Outside the Aviation Community 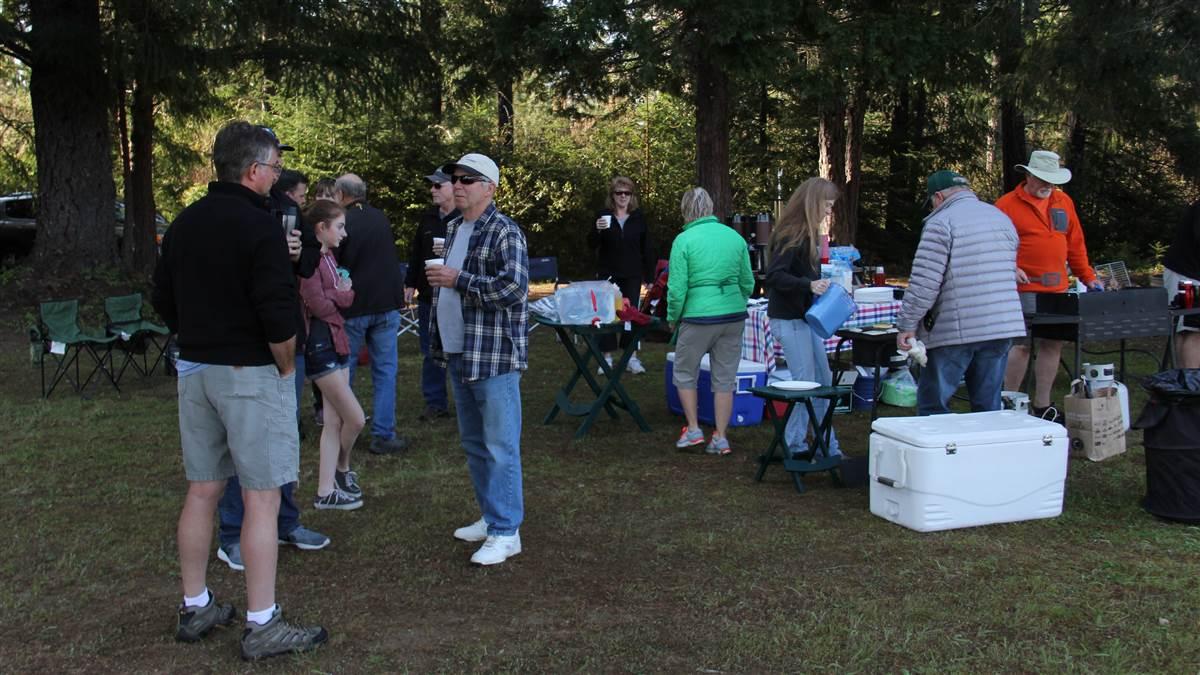 Each year the club hosts a “Spring Fling” BBQ where members get together for a day of competition and camaraderie. There’s flour bombing and spot landing contests, and plenty of food.

This year was a little different. In the past, the Spring Fling was held at a dirt strip just outside Medford’s Class Delta. But it’s in line with the VOR and the club’s activity made the controllers’ job a little more hectic than a regular day. So RVFC decided to check out a little used paved strip, Prospect State Airport (64S).

“It’s up in the mountains, it has hiking trails around to a waterfall and the scenery is just absolutely gorgeous,” Hickman said. “We talked to the [airport] caretaker, and he said it would be amazing to have that kind of activity up here.”

After a windstorm knocked down several trees and scattered branches all around the airport, five club members went up with chain saws and rakes and cleaned things up. “It looked like an absolute park when we were done,” Hickman said.

The event was a huge success – 14 airplanes, including a Stearman, 35 people for breakfast, and 50 people for lunch. But that’s not the truly amazing part of the story.

“The neighbors heard all the commotion, with planes flying in and out, and they came walking down the road,” Hickman said. “I went out and greeted them. They said they hadn’t seen this kind of activity for years. They were excited about it.”

Hickman invited the neighbors to join them for lunch and that’s where the hidden treasure of aviation was discovered. The camaraderie of the club was extended beyond the world of aviation to a small, rural logging community.

One woman expressed an interest in learning how to fly and joining the club, and other neighbors showed an enthusiasm about the club’s plans to adopt the airport and make improvements. RVFC is in the process of working with the Oregon Department of Aviation and the Oregon Pilots Association on projects like building a pavilion with picnic tables, repainting the airport name on the runway, and removing trees that limit operations to daytime only.

“We’re trying to get this collaborative relationship going with all these different partners,” Hickman said. “We have folks that have time and we all love flying and we’re trying to make it as affordable as possible. That’s the model we developed.”

The Rogue Valley Flying Club has found its hidden treasure by building a club based on camaraderie, fun events, and affordable flying. It’s part of the community known as general aviation. With the club’s continued activity, it’s a community that is sure to grow in southern Oregon.