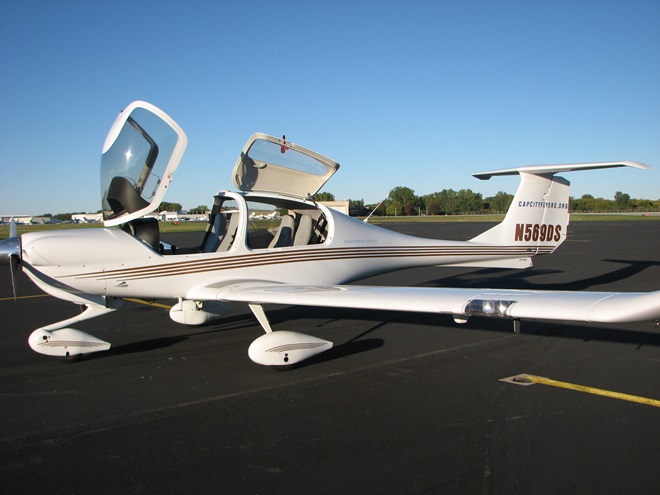 Capitol City’s hourly rate for the Diamond of $133/hour (tach, wet) is comparable to what the club charged for its Cessna 182, which was destroyed in a windstorm a few years ago. The club replaced it with a 182RG that has an hourly rate of $147.

The DA-40 burns anywhere from 7 to 12 gph depending on power settings, which is similar to the club’s Piper Archer’s fuel burn of 8-10 gph. However, the Diamond’s tach doesn’t start until the aircraft hits 30 knots, where in the Archer and 182 the tach is calibrated on 75 percent power, so it’s spinning while you’re taxiing—but slowly. “The Diamond ends up saving you money because you aren’t charged for any of your taxi time,” Colin said.

Overall, Capitol City Flyers have found maintenance costs to be reasonable on the Diamond. Buying a newer aircraft, there aren’t the same concerns or costs you might have with an older, used aircraft. Colin noted the annuals have run between $1,500 and $2,500, which is similar to what the club pays for its Archer and 182. It has a 180-hp, fuel-injected Lycoming engine, so there’s a lot less fouling of the plugs and it’s not hard to find a mechanic who is familiar with the engine.

However, there are a few things to keep an eye on. The DA-40 has a free-castering nose wheel and uses differential braking to steer. Therefore, Colin said the brakes might need to replaced sooner than in an aircraft with a directional nose wheel. He also said it’s a little more difficult to find a maintenance shop that can handle working on a composite airframe in the case of any hangar rash or structural issues. Fortunately, Wisconsin Aviation, which the club uses for maintenance, is a certified Cirrus maintenance shop so the mechanics have done a good job translating that knowledge of composites to the Diamond. There also is a certified Diamond dealer in Oshkosh, a 30-minute flight from Madison, if they have any work requiring someone with more specific knowledge of the aircraft.

“The only thing we’re really struggling with, and it’s not a major issue, is that a lot of the parts have to come from Canada and sometimes there is a little bit of a lag in getting parts for repairs,” Colin said. “Particularly if you have to order a battery from Canada. It’s hazardous material.”

Overall, Colin was quite positive about the ease and cost of maintenance.

When the Capitol City Flyers were looking to upgrade to a newer, faster aircraft its insurance company wouldn’t insure a Bonanza, Mooney, or Cirrus in a club environment. However, the Diamond was acceptable and relatively easy to insure, Colin said.

Capitol City pays $6,800 a year to insure the Diamond, which is about twice as much as the club’s Archer. The difference is mostly because of the increased hull value ($40,000 for the Archer compared with $160,000 for the Diamond). “I think the prices are fair. You’re probably going to get a good price because it’s not a retractable,” Colin said.

Although the Diamond can be used for primary training, Capitol City Flyers doesn’t allow student pilots to fly the aircraft. They do allow members to use it for advanced ratings like an IFR or commercial rating, or transitioning to a glass panel.

Although the aircraft can cruise at 145 knots, which is faster than either the Archer or the club’s old 182, Colin usually cruises at 135 knots. The G1000 with XM weather, traffic advisories, and terrain awareness, as well as an autopilot with altitude preselect provides plenty of technological features that a pilot would want on a cross-country. Club members have used the plane for trips to San Diego, Arkansas, and Florida.

However, the Diamond “is a little weak on payload,” Colin said. “It’s not really a four-person aircraft. It’s a good two-person aircraft.” Capitol City had modifications done to increase the gross weight and performance. The plane has extended range tanks that hold 50 gallons of fuel (10 more than standard) and it has about 600 to 650 pounds of useful load. A standard DA-40 from the factory only has about 500 pounds of useful load and a 40-gallon fuel tank, Colin said.

Whoever said, “image is everything” must have had the Diamond in mind. With its tapered fuselage and clean, modern cockpit dominated by the G1000 it makes a great impression. Having a stick instead of a yoke doesn’t hurt either.

The DA-40 is a good option for a club like Capitol City, which also has an Archer it uses for training and a 182 for members who are looking to take a longer trip and have enough room for four people and luggage. The Diamond is versatile enough to be used as a trainer, and is popular among pilots looking for a fun airplane with modern avionics to go in search of a $100 hamburger.

If your club is looking for something faster, sexier, and newer than the Pipers and Cessna’s that dominate most flying club fleets, the DA-40 may fit the bill. For the Capitol City Flyers, the Diamond was the aircraft of choice because of price, safety, and it’s sexiness, Colin said. While it sacrifices a bit in payload, the speed, glass cockpit, and looks more than make up for it. “It’s the most flown aircraft in our fleet,” Colin said. “People love it. It flies really nice.”