July 4th is a time for hamburgers and hotdogs. It’s a day for apple pie, and parades with marching bands and veterans waving flags as they make their way down Main Street. It’s a day for family, and friends, and fireworks. And in Penn Yan, New York, July 4th is the day for a Fly-In Pancake breakfast. For more than 60 years the Penn Yan Aero Club has hosted what is truly one of the great grassroots events in aviation.

The club started the breakfast in the 1950s and today it has grown into a holiday tradition for both the aviation community and the local area.

“It’s a well received event and has been for many years—by not only the community, but we have people that fly in from all over the place,” Club President Jim Alexander said. “It’s become a tradition. A lot of people that we speak with at events, say, ‘On the 4th of July we go to Penn Yan for breakfast.’ It has a lot of name recognition.”

The event typically attracts about 2,500 people each year, and 2016 was no different. Breakfast was served from 6:30 a.m. until 11:30 a.m. and the line was well over a football field in length shortly after 10 a.m. It stretched from the hangar where breakfast was served well past the windsock. “I can’t imagine making pancakes for this many people,” a woman in line said.

Jim estimated more than 2,750 people came out this year. The fact that nearly 3,000 people lined up and paid $10 for pancakes, eggs and sausage (kids 12 and under are $5) is absolutely astounding. Particularly when you take into account this rural farming community only has 5,000 residents. The breakfast is a fundraiser that helps the club subsidize the cost of operating its five aircraft. The Penn Yan Aero Club is celebrating its 75th Anniversary this year, and remarkably has a Piper J-3 Cub that was purchased in 1946 and has been in continuous operation with the club for 70 years. It rents for $49 an hour. The club also has a Cessna 150 that is $66 an hour; a Cessna 172 that rents for $79 an hour, and a Piper Cherokee and a Piper Archer II that are $89 an hour. Prices are Tach time, wet. An hour of flight instruction is $32 and the club has a simulator that is free to members.

The event is more than just a fly-in and breakfast. A local steel kettledrum band serenaded the crowd as they approached the hangar where breakfast was served, there were several classic cars on display and the town’s Fire Department had two trucks that were open for small kids to climb through. And if you wanted to go flying you could choose between a helicopter ride or an airplane ride in a Piper Lance—or fly in both.

Oshkosh on the East Coast

The county-owned Penn Yan Airport (KPEO) was founded, owned and operated by the flying club until a few years ago, and is similar to Wittman Field in Oshkosh. There is a 3,200-foot east-west runway and a 5,500-foot north-south runway in the same “T” configuration as Oshkosh.

And flying in was equally exhilarating. Hundreds of planes flew in on what was a picture perfect day – warm and sunny, with clear skies and little wind. That allowed inbound traffic to land on Runway 28 and outbound traffic to depart on Runway 19. While it made coming and going more efficient, it served as a good reminder that whenever you fly into an event at an uncontrolled field, proper etiquette is encouraged for safe operations.

Remember to always follow a standard traffic pattern—this is not the time to announce you are inbound on a five-mile final straight in. That’s both rude and potentially unsafe as there are likely aircraft already established on downwind, base and final.

It’s also important to communicate your position clearly and succinctly, but use some common sense. Often times at busy fly-ins radio calls get stepped on by other aircraft, so say only what is necessary and no more. If there are several planes in the pattern all calling out their positions, announcing that you are 10 miles out, inbound for landing only adds unnecessary chatter.

A fly-in of this nature is likely to have many aircraft of varying types, sizes, and speeds. So be aware of the aircraft around you and watch your altitude, speed, and pattern – if you’re in a Cub, don’t stretch out downwind into a 2-mile final unless you have to because of traffic Linda and Don Vieth flew their 1973 Piper Challenger in from South Dayton, NY – about 90 miles to the west. “I was here one other time and swore I would never come back – there were eight to ten planes in the pattern,” Don said. But it’s such a great event they couldn’t stay away and were happy they came back. “This time there were only four or five planes in the pattern,” Don noted.

Club members marshaled aircraft to parking spots in the grass on both sides of the runway. A quick look around and it truly felt like a mini-Oshkosh. Looking down the line, there was a Cessna Skymaster, a Cherokee Arrow and a 172. Across the way was a Mooney, and a Grumman Widgeon started up and had to wait for a P-51 to land before it could taxi out for departure.

There were several Piper Cubs, a Tri-Pacer, a couple of Aeronca Champs, a Stearman, and a few homebuilts, including an RV-8 and a Sonex. There was a Glastar on floats, an Ercoupe, and a Cessna 120 mixed in with the usual Piper Cherokees and Cessna 172s and 182s.

Dave Miller came with his with his wife Carol, daughter Tracy, and grandchildren Finola, 11, and Malachi, 9. “We generally come every year,” Dave said. “Seeing all the families congregate, and watching the children interface and ask questions—that’s the best part.”

He said he enjoys talking to the pilots and seeing the aircraft. “I’m partial to the planes that land on water, because we see them on the lake. It’s neat to see them up close.”

Dave’s 11-year-old granddaughter Finola said her favorite part is seeing the WWII fighters. This year she was besides herself when a P-51 Mustang flew in, and last year she got to see her favorite fighter plane—an F-4U Corsair. 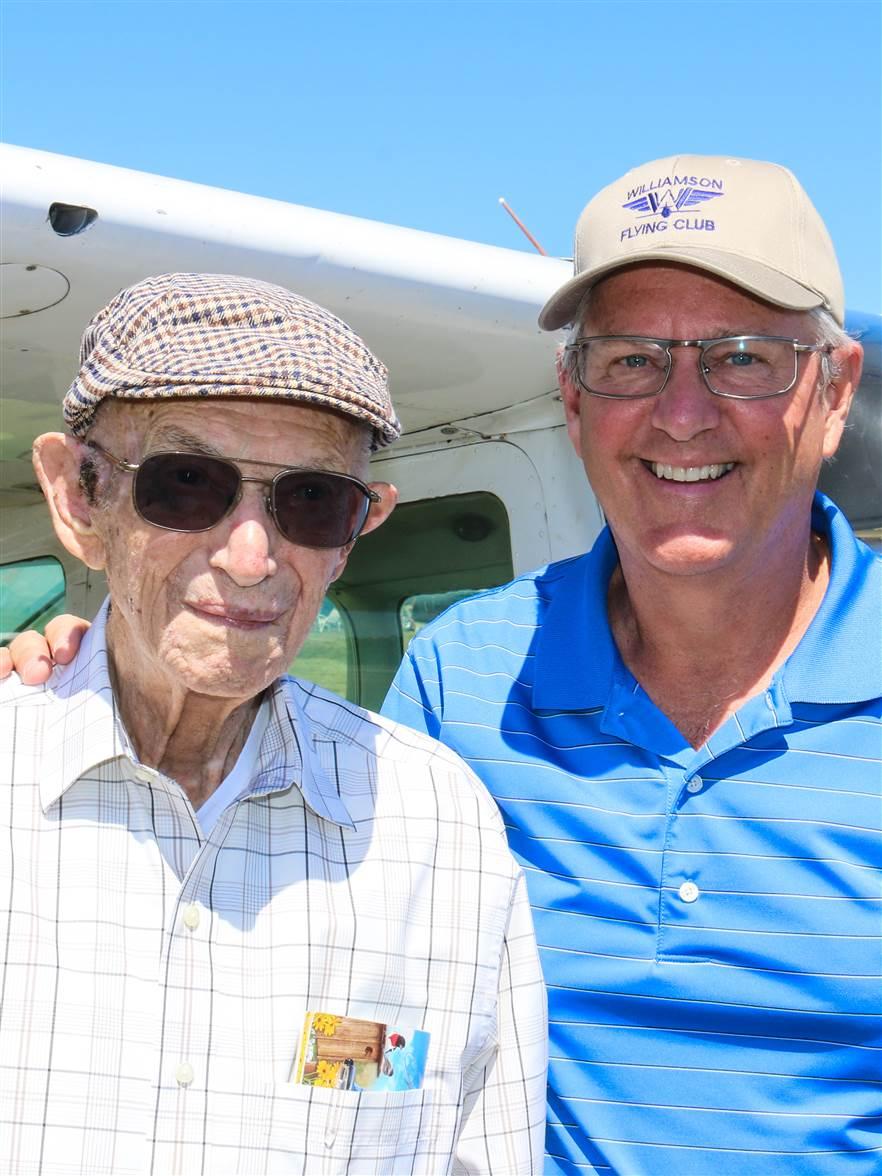 Doc Malchoff, who is 92, may have been the oldest person who flew in, although he was in the right seat since he doesn’t fly anymore. He came with his son Kevin in their Cessna 182. The breakfast is part of their July 4th tradition. Both are members of the Williamson Flying Club, which is about 50 miles north of Penn Yan on the shores of Lake Ontario. Their club hosts its own pancake breakfast each May that has been taking place for the past 52 years.

These breakfast fly-ins serve as a great way to build camaraderie among club members, as well as the local community. They also provide a great way to market the club. Penn Yan signed up two new members at this year’s breakfast and another five people expressed interest in learning more about the club. And best of all, the club will net more than $10,000 that helps subsidize operating costs to keep flying affordable in this rural community.