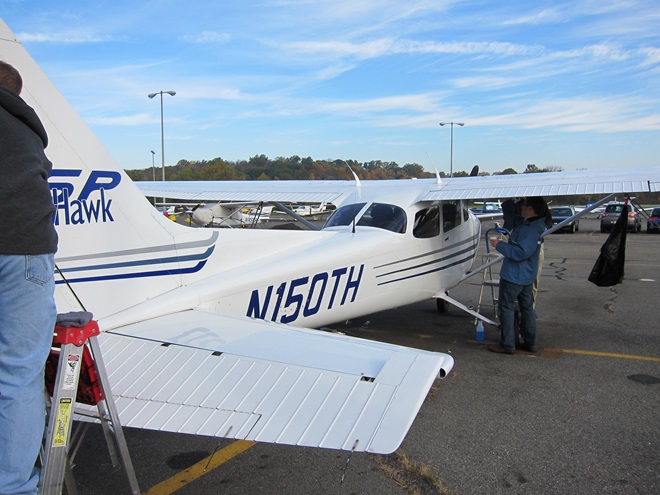 For the past 46 years the 150th Aero Flying Club has called Morristown Municipal Airport (MMU) in northern New Jersey home. Earlier this year, the club decided to add a second home and expand to Somerset Airport (SMQ) about 20 miles to the south down I-287.

Splitting up its fleet of four Cessna 172s was not a decision the club rushed into, as it had a good relationship with Morristown. But Steve Parker, the owner/operator of Somerset, saw value in having a flying club based at the field and reached out to the 150th Aero.

“We weren’t in a big hurry. If you do things in a hurry you don’t get a chance to shake out all the problems that come up,” Assistant Maintenance Officer Ed Gilroy said. “You don’t get the chance to get to know them, and them to know you. So we had this long courtship. And when it happened it was a non-event.”

Steve Parker said, “Open lines of communication between the FBO and the club are really important. Realize you have different goals, but the goals can be complimentary.”

Part of the reason the 75-member club was looking to expand to another airport was the growth and success of Morristown. Over the years, MMU has increasingly become a home to corporate jets and helicopters. It’s not the first time the club has moved because of changing times.

The club’s first airplane was a Citabria that was based at Newark Airport (EWR). But with air travel growing and the first commercial jet flights at Newark beginning in 1961, it didn’t take long before the club moved to nearby Hanover airport with its 2,000-foot grass strip. By 1970, the club moved again to Morristown Airport, where it’s been ever since.

Morristown and Somerset airports offer very different flying experiences. Morristown is a municipally-owned Class Delta field with a tower, two runways longer than 4,000 feet with ILS and RNAV approaches, and lots of corporate traffic. Somerset is a third-generation, family-owned and operated non-towered field with a single paved runway of 2,700 feet with an RNAV approach and two shorter grass runways.

Morristown also sits within Newark Airport’s 20-nautical mile Class Bravo, which means when there are presidential TFRs at Newark, the veil comes down and includes Morristown. This also was an issue after 9/11 when the airspace around New York was restricted, grounding operations at Morristown. Somerset sits about 5 miles outside Newark’s Bravo airspace and is not subject to the same TFRs.

As Morristown has grown over the years it has attracted more and more corporate flight departments, making the economics for smaller businesses serving general aviation at the airport more challenging. When the maintenance shop decided to leave Morristown and consolidate its operation at its other location at Old Bridge Airport (3N6), the club starting looking at its options.

“We came to rely on this maintenance shop. They pulled up stakes because the costs had gotten so out of hand... and they couldn’t make it work,” Ed said. “Which left us without anybody on the field [for maintenance].”

Even before the maintenance shop left, Somerset had contacted the 150th Aero because it was looking to have an active club on the field. Somerset operates a busy flight school with four Piper Cherokees, two Archers, and an Arrow. But one of the challenges is balancing flight training with aircraft rental for pilots who want to go for a $100 hamburger or take a weekend trip.

“We have a very vigorous flight school and we graduate a healthy number of private pilots every year. They want to stay and exercise their private license and we rent aircraft, but we can only rent aircraft for day trips,” Steve said. “We can’t entirely service them with our rental fleet. They’re working airplanes and they’ve got to be available for the next day’s flight school schedule. So a club is a logical thing.”

Having a club on the field provides aircraft for new pilots to use without limiting flight instruction because they are not sharing the same planes. The end result is more flight activity and happier customers who have greater access to aircraft.

“Part of it is you’ve got this nice airport here [Somerset] and you grow with these students and then they get their certificate and they leave and you never see them again,” Club President Matt Kreilein said. “This was an opportunity to keep them flying here.”

Many of the club’s members learned to fly at Somerset, so they are familiar with the airport. There are other advantages for the airport as well. Club aircraft tend to fly more than individual aircraft with a single owner. And that means additional revenue from gas sales and other services.

“FBOs look at the airplanes that are hangared and tied down and they want them to fly a lot,” Steve said. “You’re going to sell more fuel, do more maintenance, more oil changes.”

For the club, the advantages include a wider geographic sphere to potentially draw members from, more personal service because it is a smaller, family run airport, and the opportunity to have one of its airplanes hangared. At Morristown, the club aircraft are tied down, and in the winter it’s not uncommon for planes to be iced in. The cost to hangar a plane at Morristown isn’t practical.

“We’re also hoping to improve our winter flying by having a plane in a hangar,” Club Secretary and 46-year club member Dwight Staehler said. “We’ll be happy to get the ice off [the planes] and hopefully we’ll get more activity.”

Before the club decided to move one of its four 172s to Somerset, the board and the airport sat down and had a frank discussion about things like whether the club planned to use the maintenance shop on the field and how flight instruction would work.

For now, the club plans to keep three aircraft at Morristown and one at Somerset. As the relationship continues to grow between the club and the airport, that may change. Somerset Airport and the 150th Aero Flying Club are an example of how FBOs and flight schools can work with flying clubs to help each other increase activity and continue to expand the general aviation community.

“We’re all in this together—clubs need airports, airports need customers and business,” Steve said. “That’s why I think it’s a good opportunity. Hopefully, this will work. I think it will. I think it’s a positive.”