Two Months to Takeoff: How the Emporia Flying Club Got Up and Running so Quickly 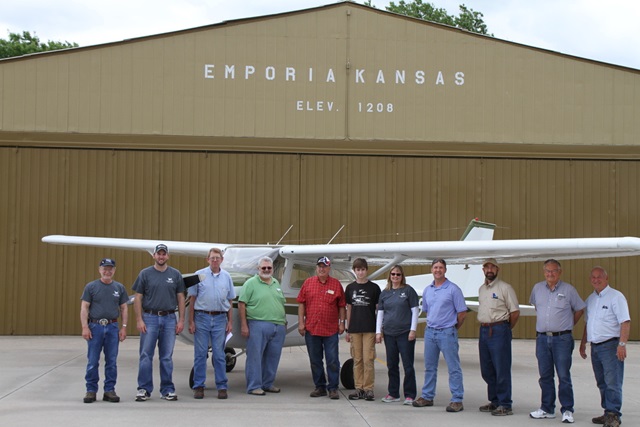 About halfway between Wichita and Topeka sits the town of Emporia, Kansas—population 25,000. It is only 90 miles northeast of where Beechcraft, Cessna, and Stearman built thriving aviation businesses making Wichita the “Air Capital of the World.” But the heyday of American general aviation manufacturing is long past, and in some ways the Emporia Municipal Airport reflects the current reality.

But change is in the air in Eastern Kansas. And maybe one day we’ll look back at the pilots in this area with the same reverence that we grant those early pioneers, and credit Emporia with helping revitalize general aviation.

In just two months, the Emporia Flying Club went from a discussion topic to a fully formed club with about a dozen members and a Cessna 172 available to rent.

Many years ago the Emporia Municipal Airport was over-populated with rental aircraft. But the market has long since dried up. 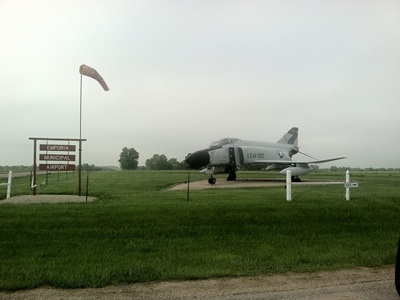 “We’ve gone for more than a decade without any rental airplanes at Emporia,” said Rick Vilander, president of the newly formed Emporia Flying Club. “There was a perceived gap of opportunity for people that wanted to pursue aviation in a way that was reasonably convenient and economical.”

Over the past year or so, members of EAA Chapter 1535, which just formed in 2012, talked about the need for a flying club. When many of these pilots got their start in aviation years ago, “there were mentors around and people to talk to and a lot of community to it,” Rick said. “We don’t have that [anymore] and we need to have that.”

A meeting about forming a club was held in late March or early April that was open to the public. “There was lots of interest,” Rick said. “Between people that were doing it to be good statesman for the aviation community, people that wanted to learn to fly, and lots of other interests, we had about 10 people right there on the spot that said, ‘Yeah, we’d kick in 600 bucks.’ We already had done enough homework that we knew that was what it would take to get started.”

After the initial meeting to gauge interest, a core group of four members said this is going to happen and met weekly for four or five weeks to get everything moving.

“We pretty much just put it together by being people that are the kind of folks that get things done,” Rick said. “We went to the group and said, ‘here’s what we want to do. We’re going to say the club exists, and we selected four people and we’re going to say they are officers, anybody object to that? No. Well we’re going to take this thing and run with it.’”

Recognizing the value mentors had in their individual development as pilots, Rick and Treasurer Lee Glanville sought the advice of another club that they both knew well. Both men had been members of the K-State Flying Club in Manhattan, Kansas, although about 20 years apart. The club is for Kansas State students and alumni and has been in continuous operation since 1955.

“We both said they know how to do it. All we need to do is copy them,” Rick said. “We just took their bylaws, changed a couple of things and the name at the top and used them.”

Lee reached out to K-State to find out how they run their club. They were supportive and helpful, and Emporia patterned its finances and bylaws after K-State. In fact, Emporia kept the same equity share price ($600), application fee ($60), and their magic number of 13 members for each airplane.

“A lot of the information that Lee used for the analysis came from the AOPA club web site,” Rick said. “That was a big impetus for what he started with to figure out what it was going to cost and then he got real numbers from K-State, added that all together and when you see it all, this is where we needed to be.”

They met with the larger group a few times, formalized bylaws, and became a corporation in about six hours one night, Rick said. They are in the process of becoming a non-profit.

When Rick was in the K-State Flying Club, they would have a waiting list and once it reached 13, they would buy another airplane. Emporia may do the same thing, but Rick said they want to give the club a year before expanding.

Right now there are 14 members, and a few others that are interested. The membership includes two CFIs, four primary students, a couple of pilots who are waiting for the FAA to change the 3rd Class Medical requirement so they currently have to find another member to fly with as pilot in command, and three members, including Rick and Lee, who own their own airplanes. There are another three of four CFIs that are approved to instruct in the aircraft even though they are not club members.

“I’m in it because if the rules change, I want more airplane than light sport allows,” Rick said. (He owns a Rans LSA.) “The other two guys are in it because they felt that the community needed the club and we needed the quantity of members to get started. Even though they have their own airplanes, they’re going to belong until such time as the club has enough demand and longevity behind it that they are no longer needed.”

How it all came together 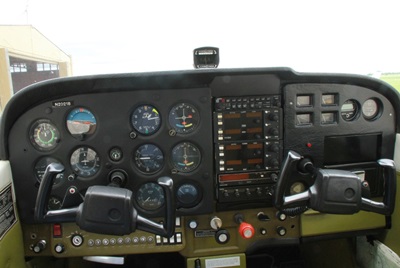 One of the things that helped the club get started so quickly was the availability of a 172 for sale in the area. They wanted a 172 because it’s a good fit for the members who were interested in starting a club. It’s a solid airplane for primary training, and the members who were already pilots had more experience with Cessnas than Pipers.

It also helped that they knew the airplane and the owner, and they didn’t have to spend time or money traveling to look at the aircraft before the purchase.  They settled on a price of about $34,000 and put 20 percent down and financed the rest.

Another factor that helped with the quick formation of the club was the support from the city, which operates the airport and sells the fuel. “The city bent over backwards, they really wanted us to be there,” Rick said. They worked out a deal on rent in a community hangar to help keep costs down and offered to keep the schedule for the club, but the club chose an electronic scheduler.

“The biggest challenge probably was just getting people together for that first meeting,” Rick said. “We talked about it for a year before we ever said, you know let’s have a meeting and see what happens.”

Rick believes if they met a year ago, the club could have been flying a lot sooner. “It was really just deciding to start, that was our biggest obstacle.”

Another challenge was getting insurance. The club found that the insurance company just didn’t understand the dynamics of operating an aircraft in a club environment. It took a lot of back and forth and explanation of what would or wouldn’t work to settle on a policy.

“It was like the insurance company couldn’t visualize how a flying club was going to operate,” Rick said. “When we got done, we had pretty good insurance, but that was probably the biggest, toughest thing to work out.”

Even with some challenges, it took just a matter of weeks to start the Emporia Flying Club with an airplane available to the members. “We want to encourage aviation and our primary means of doing that is providing a community and a safe, reasonable aircraft to be available at a reasonable price,” Rick said.

The Emporia Flying Club is a model that other people who want to start a club can look to. And maybe one day in the future, we’ll look back and view this club and others as the catalyst that helped general aviation grow again.