The Bakersfield Flying Club was recently named one of the top 10 flight schools in the country. Flight Instructor William Woodbury talks about what makes the club’s flight training successful, including its Redbird Simulator, a structured training program, and the camaraderie of a club environment.

What is the mission of the club?

The club was organized by three instructors who really wanted to make private aviation, flight training, as accessible and economical as possible. The organizers of the club are an airline pilot, an FAA examiner, and a cop. There was only one flight school in the area and they felt like it wasn’t enough so they organized the club. We want to be as user friendly as possible, bring as many people into aviation as we’re able.

It sounds like the goal was to create flight training opportunities. 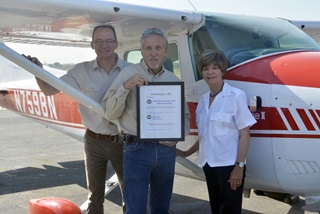 Well, no one expected it. We’ve never really looked at ourselves as a training outfit. When the award showed up, we were stunned. How could this little Bakersfield Flying Club end up in a top 10 list? We were surprised.

I think the people who are in the club like us. We’ve struck on something here. We offer economical flying, our club rates and fees are quite low. We operate with high standards. All the instructors operate with those high standards. I think when the club members learned there was a way to express their opinion of our club, they jumped on it. As a result of that we were recognized.

The number of students that start training in our club and quit along the way is quite small. The US average is quite high, 80 percent is the number I read. We have a quit rate that I’d say is one in 10.

The instructor always schedules the next lesson. They don’t say, ‘call me when you want to fly again.’ They say, ‘let’s schedule.’ So flights are scheduled out. The program that we’re using let’s students track their progress so they know they’re on track and they know they’re at a certain stage. So as a result, the aggravation is quite small. One reason students quit is they say, ‘well I had a flight lesson and its $300 every time I go and I don’t know if I really learned very much and no one lets me know if I’m making the right amount of progress in the right amount of time. So with this program it’s clear.

How is your training program set up and how did you develop it?

What are some of the aspects that you really liked?

It’s scenario training, that’s the wave of the future. We like that. It’s strictly online as well, so students are able to study at home. The program blends the ground school with the flight training. It works out quite well.

The nice thing too, students know exactly where they are. There are two Stages and 10 Phases. So nobody is wondering, ‘Am I making any progress, am I where I should be?'

How much do you charge for primary instruction?

The airplanes rent for $120 an hour and the average instruction rate is $50 an hour.

How many of your members are student pilots?

Of the 110 club members, 20 or so are student pilots. We also have 5 or 6 that are instrument students. It’s an active training organization but it isn’t large. We’re a small club.

Do you have a sense of how many members earned their private certificates through the club?

If I had to put a number on it, I’d say 20. Of those half went on to get an instrument rating.

When did the club add the Redbird simulator? 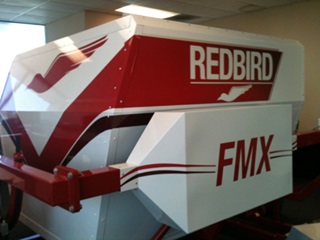 We’ve had the Redbird for the last year and a half.

Why did you add it?

Do you have a structure of how much you’ll fly in the Redbird?

We don’t have a set number of hours in the Redbird. Some instructors use it a lot, others think it’s useful for IFR training but that’s all, so those instructors use it less. It’s not a structured part of our syllabus. There are parts of our program that do use the simulator as an option.

How many instructors do you have?

Are the instructors employed by the flight club?

No, they are independent. We have quite a few instructors who want to train with us and of the ones that are accepted in the club, it’s probably one in three. Our standards are quite high.

What are some of those standards?

The trouble that some instructors have is that they want to fly and they want to teach but they’re not customer oriented. We really stress that, we stress these people are walking in here and they’re writing a check after each flight. We want to make sure at the end of their flight lesson, everybody feels that it was worth it. That means stay optimistic, stay upbeat, accentuate the positive, make sure everyone leaves knowing that they know more and they fly to a little bit of a higher standard after each flight.

How often are the instructors flying?

Of the active instructors, there are about five of us, are training between 10 and 20 hours a week.

Do most students fly with just one instructor?

Yes, but we do stage checks with a second instructor.

Tell me about that.

We do at least three stage checks where a student will fly with a new instructor.

Is a stage check a one-hour lesson or is it more involved?

It’s roughly an hour of ground, and then an hour of flight. There is a checklist. The only thing we ask of the instructor when they do a stage check, a phase check actually, is that they do all the maneuvers.

How much are the aircraft and simulator flown?

How is your Redbird set up?

Can you walk me through the experience of using the Redbird for the first time? 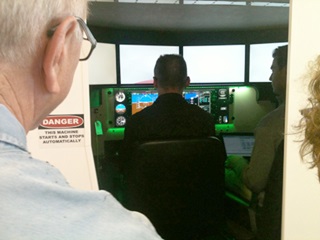 Is it a full motion simulator?

Yes it is. You can do spins, loops, rolls, snap rolls.

Does it turn upside down?

What are some other things you would do in the Redbird that you wouldn’t do in an airplane?

Engine failures, all the way to the ground. Systems failures, things like static blockages, pitot blockages, vacuum failures, stuff like that.

Do you think Flying Clubs have an advantage over traditional flight schools?

One interesting thing that I’ve observed is that it seems like flying clubs are taking a larger role in training these days. I think that a lot of the smaller flight schools, the FBOs used to offer training. A lot of those have shriveled up over the years. In its place, clubs are sprouting up instead.

Why do you think that is?

I think the number of student pilots has dwindled. When I learned to fly, there were lots of students. Nowadays, there aren’t. I think a lot of FBOs have said it’s not worthwhile to offer training. I think that’s why clubs are sprouting up.

How does a club’s camaraderie influence students?

The camaraderie is critical. Learning to fly is hard. There is studying, there is training, there is homework, there’s frustration, there are times that you feel like you’re not learning very much. You’re writing checks every flight and unless you’ve got a kinship, it’s easy to put a flight off and say I’ll fly next week. And then next week rolls around and you say I’ll fly next week instead. If you’re in a club and you’re around other people doing the same things and writing the same checks, I think it’s easier.

Flying people are the nicest in the world. If you’re around those people all the time, and hear senior pilots tell their war stories, I think that is a critical feature.

Why flight schools never really captured that I don’t know. When I was in flight school you showed up, you met with your instructor at the allotted time and you left. Clubs aren’t like that. Clubs have outings and social events and a clubhouse to hang out in and all that.

Do you have a scheduled ground school?

We haven’t had a ground school in three years, but I’m starting one next week. I expected to get six or eight students and I have 12. It looks like we’ll be holding a ground school every three months or so. We also have training seminars – 12 a year. They cover a wide range of things: mountain flying, operating in the Los Angeles airspace, which is very complicated.