For a club looking to differentiate itself from other clubs or local FBOs, you might consider either a light sport or a taildragger since there aren’t many of either type available to rent. The Great Plains Aero Club, based at Augusta Municipal Airport (3AU) in Wichita, Kansas, decided to add both with one airplane – a 1946 Taylorcraft BC12-D. At 700 pounds, it meets sport pilot requirements in a nostalgic airplane that harkens back to a simpler age in aviation. Club President Curtis Mead shares his experience with the Taylorcraft. 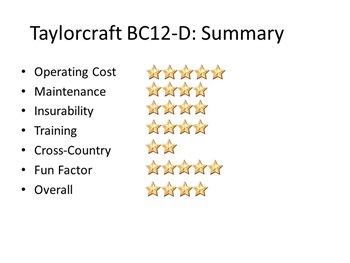 Operating Cost (5 stars)
“Operating costs are phenomenal, it’s cheap flying,” Curtis said. It has a 65-hp Continental that burns about 4 to 4.5 gph and only holds 4 quarts of oil.

One of the things that attracted GPAC to the Taylorcraft rather than a Cub was it has a lower purchase price. Prices range from about $15,000 to as much as $30,000, with many priced around $20,000. There aren’t too many aircraft in flying condition at a lower price.

It also has a little better performance than a cub. Cruising speed in the two-seat side-by-side aircraft is about 100 mph, compared with about 75 mph in a J-3 cub with the same engine. Great Plains charges $65 an hour, Hobbs time, wet.

Maintenance (4 stars)
“There are so many fewer things that can go wrong,” Curtis said. For instance, there’s no electrical system, and the panel is bare bones. Annuals run about $400 to $450, and oil changes only require 4 quarts.

But keep in mind it is a tube and fabric airplane, so it needs to be hangared. And depending on how old the fabric is and how much exposure it has to the sun, it will need to be replaced at some point. Curtis estimated that could be every 20 to 25 years.

Insurability (4 stars)
GPAC didn’t have any trouble adding a taildragger to its insurance policy, and with a low hull value it will be less expensive to insure. However, a typical checkout will require 10 hours of dual in the aircraft.

Training (4 stars)
There aren’t many flight schools that offer tailwheel endorsements, making the addition of a tailwheel aircraft to a club fleet an attractive marketing tool. Great Plains provides tailwheel transition training in the Taylorcraft and the plane has attracted new members.

Generations of pilots learned to fly in simple taildraggers like the Taylorcraft, but that doesn’t mean it’s easy to fly.

“It takes 4 to 5 hours to get used to landing—the sight picture and the speed. You come over the fence at 50 mph,” Curtis said. “It takes a little getting use to. The Taylorcraft is a handful to fly but it will make you a better pilot. If you can fly a 700-pound kite, you can fly anything.”

The Taylorcraft is a dependable trainer that could be used for tailwheel endorsements or even primary training. It harkens back to a simpler age of stick and rudder flying when pilots really felt the airplane.

The panel doesn’t have a lot in it—“just a turn and bank indicator, a tach, an altimeter, that’s about it,” Curtis said. And without an electrical system, it provides the opportunity to learn how to hand prop an airplane—something most modern pilots probably have never done.

Cross-Country Travel (2 stars)
Most people don’t get a Taylorcraft for cross-country flying, “but you’d be surprised,” Curtis said. “I’m taking it to Louisiana next week.” If you’re looking for an adventure and want to see the country low and slow, and don’t mind stopping every couple of hours, the Taylorcraft may be the perfect plane. But with only 18 gallons of fuel and a useful load of 450 pounds, it’s best suited for local flying.

It’s hard to describe, but any pilot with a tailwheel endorsement will tell you it’s just more fun than flying modern Pipers, Cessnas, or Cirruses.

“There’s a cool factor,” Curtis said. “When you taxi in to an airport in the Taylorcraft, everybody goes, ‘That’s kind of cool.’”

Overall (4 stars)
An antique aircraft isn’t for everyone, particularly one you have to hand prop. But if you are looking to add something unique to your club that meets the Sport Pilot regulations at a very affordable price, along with a touch of romance and nostalgia, than the Taylorcraft is something to consider.

“It’s been a real attention getter. We’ve had a couple people join the club just for the purpose of flying that airplane,” Curtis said. “It’s been a great thing.”