When the economy slowed and high fuel costs resulted in a reduction in flying hours, the Lehigh Valley Flying Club in Allentown, Pennsylvania, made adjustments. It reduced its fleet, and surveyed its members to get a sense of what aircraft would best support the membership. The club also created incentives to keep active members current and to recruit new members. Club President Phil Ritts and Secretary Steve Mays share Lehigh Valley’s formula for refreshing its fleet, engaging existing members, and recruiting new ones.

Tell me about the Club.

Our club is for the general-purpose pilot flying general-purpose planes. We are a 501(c)7 social club formed in 1956.  We have a rule of thumb of one plane per 25 flying members. We’ve got about 65 active pilots and the rest are a mix between social and inactive members, so we’re around a hundred members total.

Explain your membership categories and fees.

Our categories of membership include the following:

Active Members. Active members apply to join and pay a discounted initiation fee of $500 (normally $1,000) when elected by the voting members. Dues are $65 per month. Active Members have full access to Club facilities and aircraft in which they’ve been checked out by a Club instructor. Active members also have voting privileges.

Social Members. Social members may attend Club meetings and functions and access the Club’s facilities, but may not use the Club aircraft nor are they eligible to vote. Social Members pay an annual fee of $40.

Honorary Members. The Club may elect to invite a person to join the Club as an Honorary Member as a way to recognize someone for their service to the aviation community.  Honorary Members don’t pay an initiation fee or monthly dues.

What were some of the things that you did to keep people engaged when pilots were flying less? 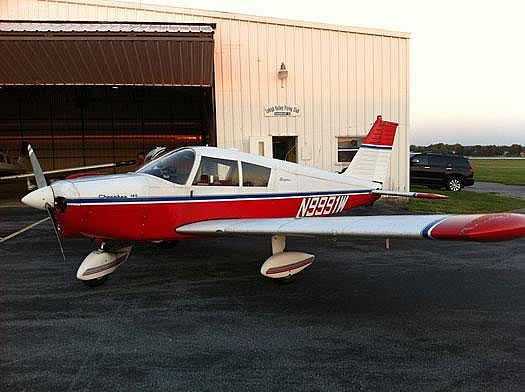 The past three years have been particularly tough because of the economy. When flying hours went down, we sold one of our aircraft, a Cessna 172, to get down to three aircraft. People weren’t flying as much as they were previously but we were still financially doing well.

We tried to keep interest in aviation high while member levels and flying were down, and be prepared for when people were going to start flying again.

We tried some incentives. In the spring we did a refresher where we offered a discounted rate to get people interested in getting current again. We have six club instructors and they would do biennials and those sorts of things and that worked.

Was that a recruitment tool or to keep members current?
It was a promotion toward our current members. We did a promotion for former members – come back to the club and your initiation fee would be cut in half. We attracted three or four members that way.

That helped us get through the past few years when flying was down. Now flying hours are trending back up, and member levels are coming back up.

You have recently purchased two aircraft. Tell me about that.
I wanted to focus on our aircraft refresh strategy. Every once in awhile we’ll try to get a new plane into our fleet. Historically, our approach has been haphazard. The asset committee would get together and say I think we need this plane or that plane, but there didn’t seem to be a lot of rhyme or reason as to how the decisions were made.

Whenever pilots got together and started discussing what kind of plane we need, it always broke out into very heated discussions because people are very passionate about what aircraft they believe is right for the club. A lot of it was biased.

We started off with some surveys. First we wanted to know about our pilot base—we needed to find out who has what type of certifications and ratings, how long they’ve been flying, and then we wanted to know more about their pilot behavior. What kind of flying do you like? Do you like the VFR hamburger flights? Do you like the longer cross country flights? Are you looking to seek a higher certification level, like an ATP or are you just comfortable hamburger flying?

That survey was very telling. We learned about 50 percent of our members were IFR pilots and half of them were interested in long cross countries. Fifty percent of our flying hours were from folks who are going to fly long distances. They don’t fly as often, but when they do fly, they put a lot of hours on the plane. Some members were seeking advanced certifications. The other half was very interested in flying local, VFR hamburger flights.

The analysis led us mostly to local, two-seat hamburger flying. The refresh strategy was to get our next aircraft a two-seater, VFR-type airplane. Very low cost to operate. We whittled it down to about five aircraft – an RV, a few experimentals, a Piper Warrior, even the Diamond D-20 was on the list. Ultimately we settled for the Cherokee 140, which is close to the Piper Warrior. We got it late last year.

We did a second survey targeted to what do you want to fly. A lot of our members want to do long cross-countries, but were frustrated with our Archer III. It’s a fantastic plane, it has all the wonderful avionics, but the one big drawback it had so much soundproofing and other amenities on it, it was weight challenged. We could take two adults and a child. Anything more than that we would have to fly at half tabs to go anywhere and we couldn’t go long distance. That was very frustrating for us.

The surveys for a long cross-country, heavy hauler type led us to either a Dakota or a Cessna 182.  I’m just thrilled we were able to get a 182 into the club. People can’t wait to fly it. We were very fortunate that we found a 182 in very nice condition that has a 300-hp fuel-injected engine. For 1979, that is very rare. We proved through analysis that it was the right decision for us.

Tell me about the club’s financing. How were you able to acquire two new aircraft in the past year?
The Cherokee 140 we were able to get with cash. We bought it for $15,000 and that’s supposed to be our primary trainer.

The 182 is going to be servicing our long distance cross-country flyers, that’s the same population that the Archer III was servicing. We’re going to sell the Archer III and use that to pay off the note for the Skylane. Part of the proceeds from the Archer III, we’ll use to refresh the Archer II. It is getting up there in years so we want to get something newer. That is the third part of our refresh strategy.

Our dues pay our fixed costs—hangar, utilities, insurance. Then we also create four funds. Every hour we fly an aircraft we take some money of the flying rate and we fund these funds. There is a fuel fund, an engine fund, a maintenance fund, and an aviation paint and interior (API).

The API is supposed to be for capital improvements, anything you are going to put into the plane that is going to be better than the equipment you’re replacing. If it’s going to be like for like, that comes out of the maintenance fund. So that’s how we distinguish those four funds. Every hour we fly we take $5 and put it into the engine fund or $5 goes into the maintenance fund and such. That’s based on historical data. We have a formula.

Recently, we’ve done away with the API fund. We already have a capital improvements fund and we haven’t been dipping into it. We’re putting more money into the capital fund so if we decided to repaint the plane or redo the interior or upgrade a DG to an HSI, we can do so with the capital fund.

What ideas do you have for the future of the club?
We came up with the concept of the Sub Club. We’ve always known that there is a population of pilots that aren’t interested in flying general-purpose planes. They want high performance, they want complex, maybe vintage or aerobatic. So how do you tap into that demographic?

The Sub Club would be a splinter organization from us. Sub Club members would pay the regular $65 a month in dues but also another series of dues to be part of the splinter club. It would leverage our finance system, our board, everything. We would run everything for them and all they would have to do is fly whatever aircraft they choose to get.

The whole model would be scalable. You could start off with a taildragger and then do another Sub Club for an aerobatic plane to tap into that demographic of pilots. We didn’t want to do anything like that until the economy improved. If we could just take that idea and mature it a little more, that would be a way to get away from the general-purpose pilots and general-purpose planes and diversify to other aircraft.