What is the AOPA Flying Club Finder and how can it help my club? 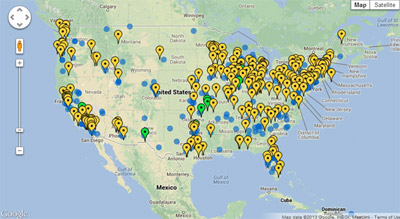 The AOPA Flying Club Finder is being developed as a comprehensive one stop resource for finding flying clubs in the country.   Its primary goal is to be a marketing tool, helping prospective club members find a flying club in their geographic area of interest.

As an illustration of how we’d like to see the Finder work, we recently heard from Bob Reed, the leader of a small flying club in Central Pennsylvania, York Travelers.  The club had been struggling to recruit members and was even considering ceasing operations.  But a number of inquiries were received through the AOPA Flying Club Finder, resulting in two new members joining the club, enough to get the club back on its feet again.

The first version of the Finder was first launched in October 2012, and since then we have continued to refine the database and add improved search functions.   I am pleased to announce that AOPA is now in the process of releasing version 2.0 of the Finder.

Some highlights of the new version include:

Being included in the AOPA Flying Club Finder allows a club to effectively advertise itself on a national level.   AOPA will be working to direct pilots and student pilots towards the site.   We have also designed the Finder so that your club’s entry should perform well on internet search engines.

The AOPA Flying Club Finder can be found here: http://www.aopa.org/CAPComm/flyingclubs/flyingclubfinder/

Please take a moment check your club’s entry.  If you find missing or inaccurate information, let us know via [email protected].

We’re paritculati club in formation functionality.  The addition of this feature will allow individuals interested in starting a new club to meet, and start the process of getting a new flying club off the ground.  The process of meeting other individuals that would like to start a club has been difficult in the past, and the goal of this part of the new Finder is to improve the chances of joining together a like-minded group.

Many of the first individuals that will benefit from this new aspect of the finder are the ones that did not win the recent start a flying club scholarship.  The scholarship is directly helping two people get a flying club off the ground.  The other 124 individuals that applied are going to be entered into the finder database as a way to assist them in starting their own clubs.