The AOPA Foundation High School Aviation STEM Symposium is the ONLY high school event in the nation that specifically targets aviation and aerospace content.

Pilots, drone operators, aerospace engineers, scientists, technologists, and technicians will always be in demand. Despite the impact of the pandemic, forecasts continue to project shortfalls over the next twenty years as a result of an aging workforce. The AOPA Foundation High School Aviation STEM Symposium is a great opportunity for educators and administrators to discover how they can prepare students for success in these exciting and well-paying careers.

Watch the pre-recorded broadcast of the 2020 Symposium here.

Come learn from the experts in aviation education. Join us for two full days of breakout sessions, industry tours, and networking opportunities you will not want to miss.

The AOPA Foundation High School Aviation STEM Symposium is your chance to get to know the leaders in the field. Our speakers come with a wealth of experience in education, aviation, aerospace, and more. They will share lessons learned and provide fresh ideas to take back to your classrooms. Breakout sessions are designed to help you get the most out of your experience, whether you’re interested in starting an aviation program, adding aviation content to STEM classes, or enhancing an existing aviation initiative at you school.

The excitement about aviation education from participants at this symposium creates an energized atmosphere you won’t find anywhere else!

Agenda will be updated as details become available - check back periodically. 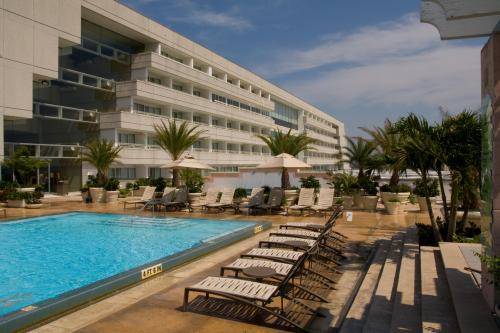 AOPA has reserved a block of rooms at the Hyatt Regency Orlando Airport (9300 Jeff Fuqua Boulevard, Orlando, FL 32827) from November 13 through 17, 2021 at a special group rate. Make your reservations now to guarantee your room rate.

Please note: The Hyatt Regency Orlando Airport is conveniently located within the Orlando International Airport (MCO). Ground transportation will not be required if you choose to stay at the symposium hotel and fly into MCO. 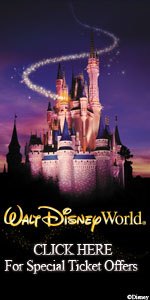 Information about pre-conference tours will be available soon.

CANCELLATION POLICY: All cancellations are required to be made in writing for any applicable refund to be processed. No refund will be provided for cancellations received after Friday, October 15, 2021.

Do you have a great idea for a Symposium breakout session or a compelling story to share with Symposium attendees?
Contact us at [email protected].

Speaker information will be updated as details become available - check back periodically. 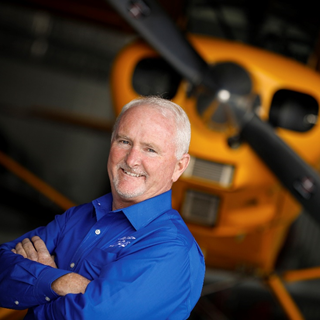 President, Aircraft Owners and Pilots Association
Mark R. Baker joined AOPA in 2013 as president and CEO of the Aircraft Owners and Pilots Association (AOPA), the world’s largest civil aviation organization. A native Minnesotan, Baker earned his pilot certificate in his twenties and has logged more than 10,000 hours of flight time in aircraft ranging from light seaplanes to turbines and helicopters. A graduate of the University of Minnesota, Baker has served on numerous corporate boards and has taken leadership roles with several nonprofit organizations. Before his appointment at AOPA, Baker served in numerous senior executive roles, including CEO of Orchard Supply Hardware Stores Corporation, a leading retailer of home improvement and garden products. Baker also served in senior executive roles at Scotts Miracle-Gro Company, Gander Mountain Company, and The Home Depot. Earlier in his career, he also worked for HomeBase, Scotty’s Home Improvement Centers, and Knox Hardware and Lumber. In conjunction with his role as president and CEO of AOPA, Baker is chairman of AOPA’s Political Action Committee; chief executive officer for the AOPA Foundation; president of the International Council of Aircraft Owner and Pilot Associations, representing pilots in 81 countries; and publisher of AOPA Pilot, the world’s largest and most influential aviation publication. 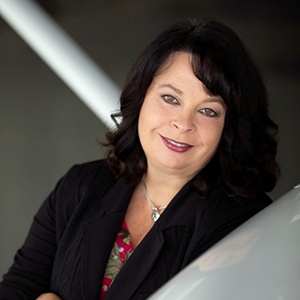 Executive Director, You Can Fly, Aircraft Owners and Pilots Association
Elizabeth Tennyson is the executive director of You Can Fly and is responsible for programs designed to get people flying and keep them flying. You Can Fly comprises four initiatives aimed at introducing high school students to aviation career opportunities, improving the flight training experience, making flying more accessible and affordable through flying clubs, and returning lapsed pilots to the cockpit. A native of California, Tennyson earned her private pilot certificate in 1998 and is an instrument-rated private pilot and a hang glider pilot. Tennyson holds a Master of Business Administration from the University of Maryland’s Robert H. Smith School of Business, and undergraduate degrees in Broadcast Journalism and International Relations from the University of Southern California. Tennyson first joined AOPA in 1998. Prior to joining You Can Fly, she held positions that included managing editor of Flight Training magazine, executive editor of AOPA Pilot magazine, vice president of publications, vice president of eMedia, and senior director of communications. Tennyson was a television, radio, and wire service reporter, working for the Associated Press in Los Angeles, Miami, and Raleigh, North Carolina, before joining AOPA. She also served as editor in chief for a collection of legal and golf magazines. Tennyson serves on the boards of the Aerospace Center for Excellence and the Aviation Accreditation Board International. 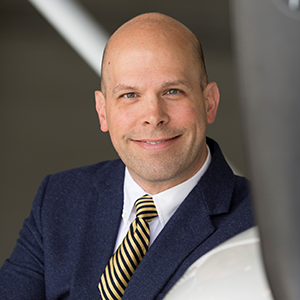 Director, Curriculum Development, You Can Fly, Aircraft Owners and Pilots Association
Erik is the Director of Curriculum Development for the High School Initiative at AOPA. Erik joins the You Can Fly team after 25 years in education as a STEM supervisor, technology curriculum coordinator, teacher trainer, and classroom teacher from elementary school through high school physics. As the Program Director for the Global Learning non-profit organization in New Jersey, Erik designed and delivered STEAM training for teachers. His week-long summer institutes offered teachers hands-on learning experiences in problem-based learning and the engineering design process. Erik has inspired his students with aviation-themed lessons while teaching in places as diverse as Tianjin, China, Dubai, United Arab Emirates, and Chatham, New Jersey. A 3,500-hour ATP certificated pilot, Erik earned his private pilot, CFII, and MEII credentials in high school and college before instructing full time and completing his master’s degree in Education. 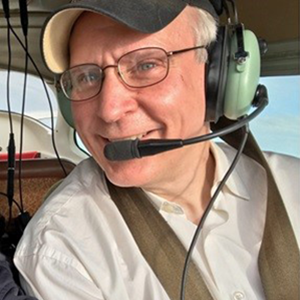 Director, High School Outreach, You Can Fly, Aircraft Owners and Pilots Association
Glenn is responsible for providing programmatic, management and fiscal oversight of AOPA's High School initiative. He helps lead AOPA's effort to expand the adoption and implementation of the AOPA High School Aviation STEM Curriculum from its current 200+ schools in 38 states. Prior to joining AOPA, Glenn worked in the Pittsburgh Public School District as a Mathematics and Aviation Teacher and the Aviation Program Founder. He has thirty-one years of experience in the public sector as a secondary mathematics and aviation teacher, building and district level administrator, and gifted education curriculum development specialist. In 2002 he founded the Pittsburgh Gifted Center Aviation Program in the Pittsburgh Public Schools. Over the next 18 years the program introduced over 3,000 students to the joy of flying, fostered over 900 first airplane rides as part of the EAA Young Eagles program, and helped inspire 27 former students to become FAA certified pilots. His students inspired him to earn his private pilot certificate in 2014, and he is currently working toward his instrument rating. In 2005, Glenn co-founded and was named President and COO of Frameworks Information Technology, Inc., a web-based data visualization and GIS analysis platform delivery company. He was also an educational data systems consultant at the state and national levels. 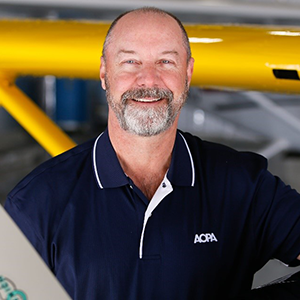 You Can Fly Ambassador, Aircraft Owners and Pilots Association
Jamie Beckett is AOPA’s You Can Fly Ambassador in Florida. His mission is to share the enjoyment of all general aviation has to offer with anyone and everyone who shows an interest. Jamie can most often be found presenting Rusty Pilot seminars, working with flight students to improve their success rate, and guiding interested individuals and groups through the process of starting and operating flying clubs. His preferred mode of transportation is a bright yellow and black Reimagined Cessna 152, which he often refers to as his company car. Jamie holds commercial land and sea ratings for airplanes, as well as instrument and multi-engine instructor ratings. He’s owned multiple airplanes over the course of his career, ranging from a relatively ordinary 1963 Cessna 150, more than one WWII era Piper J3 Cubs, and an experimental AirCam twin-engine adventure machine. An A&P mechanic with a penchant for the classics and a frequent contributor to a wide variety of aviation publications, Jamie’s passion for general aviation is truly infectious. 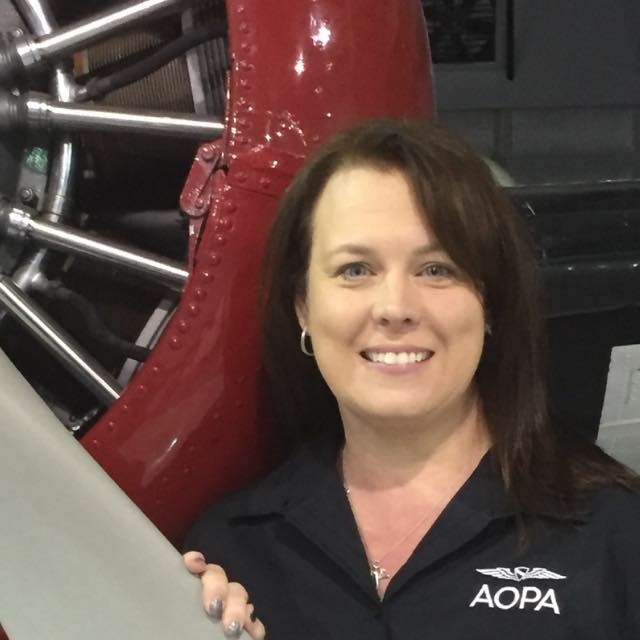 Manager, High School Aviation Initiative
Karla Smith, Manager of the High School Aviation Initiative, is responsible for providing strategic direction and oversight for multiple projects and activities within the AOPA High School Initiative. Karla brings five years of experience as the AOPA Manager of Aviation Events and Sponsorship to the High School team. She provides project management, event planning, and sponsor and exhibitor recruitment and management for the AOPA High School Aviation STEM Symposium. She is a key communicator to prospective schools and districts during curriculum recruitment and retention activities. Karla applies her experience as the Vice-Chairperson of the Tullahoma Regional Airport Authority and a member of multiple volunteer aviation boards to advise AOPA schools across the nation on best practices for building partnerships with aviation organizations and corporations. Karla plays a crucial role in High School program data collection and evaluation. She also directly supports AOPA curriculum teachers and assists with professional development activities.

The AOPA Foundation is actively monitoring the incidence of Coronavirus Disease 2019 (COVID-19). We have been asked how COVID-19 may impact the upcoming AOPA Foundation High School STEM Symposium. The AOPA Foundation will meet or exceed all local, state, and Centers for Disease Control and Prevention (CDC) requirements regarding large gatherings and preventing the spread of COVID-19.

At this time, our upcoming AOPA Foundation High School STEM Symposium will take place as planned, in person and virtually. If you are sick or feel you are getting sick, we ask that you please stay home. The CDC recommends that people in high-risk groups consult with their healthcare provider about attending any large gathering. If you decide not to attend in person, we encourage you to attend virtually!

The mission of Air Force Recruiting Service is to inspire, engage and recruit the next generation of Airmen and Space professionals. We are looking for America’s best and brightest to fill approximately 30,000 opportunities in more than 200 Air Force specialties, as well as more than 300 space professionals in approximately 27 specific career fields in fiscal 2021. Additionally, our total force partners, the Air Force Reserve and Air National Guard are collectively hiring more than 19,000 part-time Airmen. Our military recruits to retain, providing tough, highly technical training that gives our future servicemembers the right skills to sustain the combat capability of America’s Air Force and protect our nation’s interests in space. For more information about Air Force and U.S. Space Force benefits and opportunities, go to www.airforce.com.